Towards the end of the seventies Frank and Leon’s neighbour’s son bought  a 1949 Ford Prefect with the aim of a complete restoration.  The process was followed closely by Leon, who already as a boy was fascinated by old and classic cars. On account of lack of time the restoration could not be completed and towards the end of 1986, when the shed in which the car was parked had to be pulled down, Leon purchased the car. This fanned Frank and Leon’s  enthusiasm for old cars considerably.  Gradually, what started as a hobby grew into a passion. They threw themselves into everything there was in the field of old-timers in the Netherlands. A week after the purchase of the Ford they bought a second old-timer: a 1971 Mercedes Benz 250C, followed by a 220Sb fin tail a short time later. In January 1987 Frank bought a book about every car Mercedes Benz ever manufactured and from that moment on this book was studied on a daily basis. What beautiful cars! If ever a dream could be realized..

It was not long before the brothers concluded that the 300SL was the most beautiful car ever built by Mercedes Benz. Frank, as a 19-year-old student and Leon, as a 23-year-old employee in his father’s business, decided to save up. The Mercedes-book showed them the 190SL as an affordable alternative for the 300SL. In the beginning of 1987 the price for a 190SL that could be restored was approximately  fl 10.000 (Dutch guilders.) They did not have that much, but in 1987, after a lot of hard work and more saving up they bought a 190SL for fl 13.000. At the time nothing decent could be bought under fl 13.000. In that period prices of 190SL’s went up at a bound.  In the beginning  they worked on the 190SL only intermittently, because they wanted to finish the Ford  first. After that they fully applied themselves to the restoration of the 190SL. It was an authentic Dutch car, which meant a lot of corrosion. The car they had purchased was not entirely complete, so the brothers went searching for parts. However, quite often no single items,  but only whole parcels of parts were offered, as a result of which they soon had duplicates of many parts.

In June 1987 they joined The Mercedes Benz Veterans Club and by doing so they provoked the curiosity of fellow-member Koos Vrolijk, owner of a 190SL. At the time it was customary for new members to be announced in the club magazine. He lived in the vicinity and came to have a look. On their car Koos Vrolijk saw parts his did not have, so he became their first customer for parts.

In June 1989 Astrid, Frank and Leon’s elder sister, moved with her husband to California. A good place to have relatives, certainly when you are trying to locate old cars. It was not long before they went to visit her and decided to buy a Mercedes Benz car there and ship it to the Netherlands. It was a magnificent 230SL. The trunk was loaded with Mercedes Benz parts which they also bought there. They learned a lot, but earned nothing.

After this beautiful 230SL, a 190SL followed that still had to be restored. It was sold and the new owner said: ”I want this one to be as beautiful as yours, will you do that for me?” Their response was an unconditional “yes” and so, besides parts and car sales they started their restoration activities. Many unrestored sports cars were imported from America and sold. Waits of more than two years for complete restorations were the result. All this took place in simple sheds behind the parental house. A sizeable conservatory behind the house was used as an office and a place to store parts. Also the attic of the house was used to store parts. When there was lack of space the sheds were slightly extended. However, the business kept growing and so did the need for a substantially larger workshop.

Towards the end of 1995 the Van Dijk brothers bought new premises on the Kruisbaak in Lisserbroek. The building needed extensive rebuilding and redecorating, which took months. In May 1996 it was officially opened. In the years that followed numerous 190SL- and Pagoda-restorations took place, more and more customers came for maintenance, repairs, partial restorations, revisions, new tyres and inspections. More models came to Lisserbroek.  All Mercedes Benz models built from 1955 till 1971 are welcomed. “The Mercedes Benzes from that period are near to our hearts”. This is the big secret of their success. In 2012 the team of four specialists know what it means to co-operate smoothly. We would like to introduce them to you: Frank is the financial man, mainly responsible for buying and selling. In most cases he is the voice on the telephone. Frank is a true expert in locating and finding Mercedes parts world wide. Leon can be put to work everywhere, but he prefers working on the 190SL. His heart is in fine-tuning engines and restoring body-work.  Through the years he has restored thirty 190SL’s from scrap-iron to new-condition. He is also the welder and sheet metal worker in the company and he developed a 190SL-body-restoration-mould.  He also likes to work on other Mercedes Benz types from the period just mentioned. Maintaining Pagodes, sedans, coupe’s and convertibles, fitting new leather upholsteries and soft-tops, restoring hard-tops, replacing inside roof-linings, damage repairs, mounting new wire-cables, etc.  Further he assists Frank when the latter is busy selling parts.

Nico, who joined the business in 1998, is specialized in fine-mechanics. He repairs mechanical en hydraulic components and he is the designated man to work on the “exchange service technical parts” and the W100, the legendary Mercedes Benz 600.  These cars, especially the extended versions, are loaded with complex systems. For Nico nothing is too complicated. Steering boxes, power-steering pumps, gauges, brake power assistants, wiper motors, radio’s, window mechanisms, heater units, fuel pumps, injection pumps and bent soft-top frames. Nico possesses the expertise and enjoys repairing them. It is also Nico’s task to fit in alarm systems, starter interrupters, I-pod connections and audio-systems. His favourite car to work on is the Pagode and that is a good thing, because more than two hundred are maintained in Lisserbroek.

Jan joined the team in 1999. He is also a many-sided mechanic. Besides tinker-work, mounting new tyres and performing purchasing inspections, he is responsible for planning maintenance schedules. It is also his duty to see to everything concerning the workshop like the revision of starter motors, alternators, gear-boxes, brake boosters, radiators and all kinds of necessary materials and liquids. Jan is a real knuckle-bone. After 12,5 years of loyal service, he has not been ill one day. His favourite cars are Pagodes, the 300SL Gullwing and Roadster. These days he is restoring a 300SL gullwing. Jan also excels in taking out and remounting engines for revision. Not long ago they completed their 75th revision.

“Van Dijk classic Mercedes Benz cars and parts” today, is a business which has extensive experience with post-war Mercedes Benz cars. They have an impressive number of total restorations to their name. Besides private customers they also supply colleague-restoration businesses, car dealers, engine revision businesses and Mercedes Benz dealers, at home as well abroad with parts, restoration- and repair work and the exchange of technical parts. They also produce sixty reproduction parts, which are sold worldwide.

Photo impression of what we do 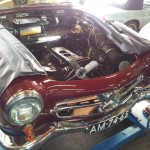 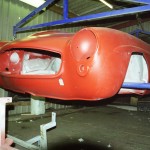 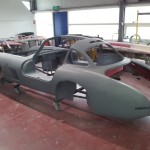 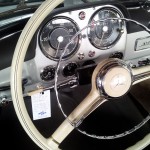 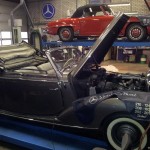 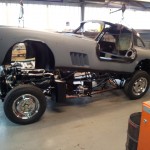 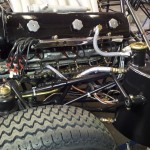 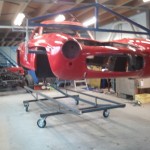 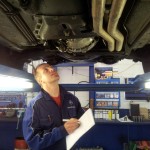 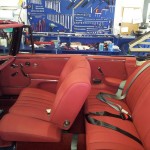 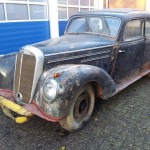 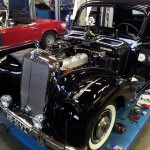 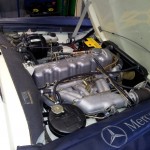 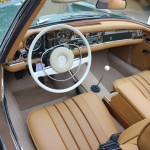 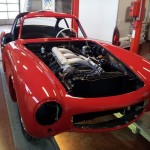 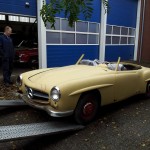 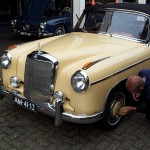 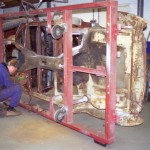 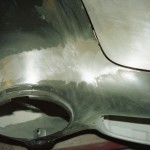 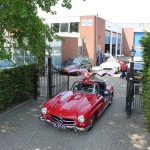